I went to PyCon (again) and it was amazing (again).

I went to PyCon again this year, for the second time, and had a predictably great experience.

It's hard to do it service after the fact, given the extent to which it's a social event as opposed to a technical one. That said, trying is still a worthy endeavor, so let's! 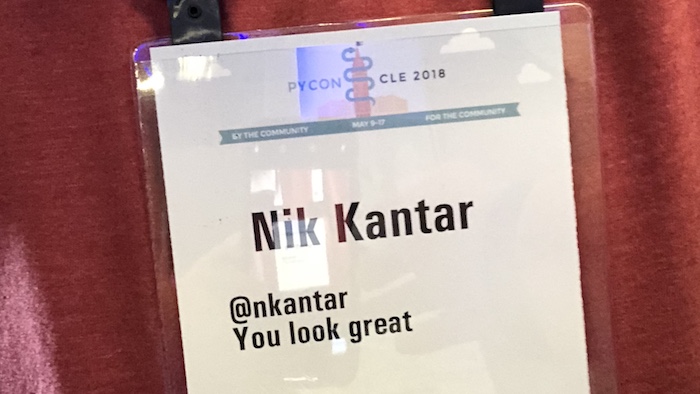 I met a lot of new folks this year, more than the last time for sure. Naming them here would be weird, but I plan on reaching out to them over the next few days to follow up.

Said meetings occurred mostly during meals, open spaces, and post-conference social events. PyCon attendees are generally such a lovely bunch that joining a random group for every food outing tends to be a really solid strategy.

This year I didn't attend nearly as many as last year. I went to the secret/config management one hosted by Mahmoud, and was briefly at David's Pallets/Flask session before having to step out. I was reminded about Pocket Protector and learned a few things about managing secrets (like don't store them in environment variables as your environment may find itself dumped into your logs) at the former, and got an overview of the state of the Pallets Projects portfolio at the latter. Neat.

All the talks are posted on YouTube, on the official channel.

A few of my favorites (in alphabetical order per author):

But really, you should just go and watch everything.*

* Aside: What to Actually Watch

The reality is that there are way too many talks for you to watch them all, unless you happen to have lots of downtime. And if you do, there's always PyCon 2017, and PyCon 2016, and PyCon 2015, and PyCon 2014, and…you get the point. In all likelihood, you have to be picky, and I understand.

My strategy is to try watching just about everything that isn't entirely unrelated to the things I do. I use Python to build web applications, to manage some of that stuff, and for general programming, so I effectively try and watch everything that isn't data science or machine learning. Yes, this means I miss a lot of really great stuff, but I get plenty out of most of what I do watch.

That's because I end up watching talks about the web, but also on more general topics, such as static types, software engineering best practices, and the Python community itself. These are all at least somewhat interesting to me, tend to be valuable, and there is enough variety to expose me to new ideas.

I'll admit I didn't experience too much of the city, but what I did I quite enjoyed.

PyCon was held at the Huntington Convention Center, right in Downtown Cleveland. This put us a few blocks from the Rock & Roll Hall of Fame, tons of food, and Lake Eerie. I didn't get the see the Hall of Fame this time, but all the food I had was excellent, and the lake was a beautiful sight from my hotel room. Downtown architecture is also really interesting to someone not used to seeing much other than Los Angeles.

I'll definitely be going next year, and am already excited for it. I actually thought about booking a hotel room before leaving…

I hope to stay in the same hotel—the Hilton Cleveland Downtown—as it's a rather nice hotel on its own merits, and is connected to the convention center by a direct tunnel, allowing me to leave my jacket in the room and stop by there quickly before heading out in the evening if need be. It also means I'm 15 minutes away from my laptop at all times, which I didn't use at the conference at all, and would thus prefer to leave in the room unless I expect to need it for an open space or some unstructured hacking.

My lightning talk didn't make it in this time, but I'm definitely going to try to speak again, and by then I'm hoping to develop the full version, so I can try for both.

I'll participate in more open spaces, as they're generally pretty rewarding. Not doing so this year is a bit of a regret.

I plan on hanging around for at least some of the sprints. It didn't work out this year for a variety of reasons, but I think I can make it happen if I prioritize it higher.

And finally, I'll make sure I have time to see the Rock & Roll Hall of Fame and nearby museums.

See you next year!