I'm looking for my next destination. Could your company be it?

Update: I'm no longer looking. :) Everything below is for reference/posterity. 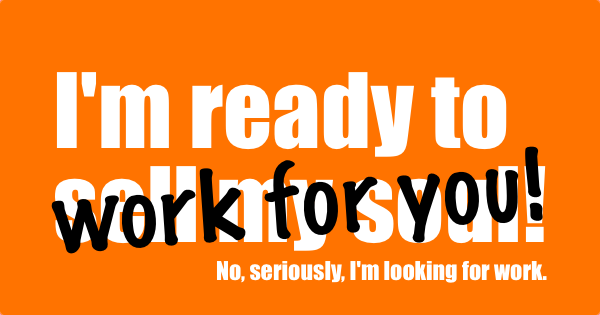 I wrote my first lines of code in the early 90s, when I was about 7. Don't let this fool you, though—what followed was a cool decade and a half of not doing anything noteworthy with computers, until my first real computer-related job in 2006.

At that time I was in early college, rediscovering programming, and I started writing PHP and maintaining Linux servers part-time. Shortly thereafter I went off to get a design degree before going back to programming in 2011.

I then did more PHP than I ever really wanted to, until discovering Python sometime in 2014 or so. I dove into it pretty heavily and immediately fell in love. Ever since, I've thought of myself as a Python programmer first and foremost. Most of that time I've spent wrangling Django and Flask one way or another, usually backed by PostgreSQL and deployed either on Heroku or plain ol' Linux boxes (sometimes managed by Ansible).

For the past 8 months or so I've been working with an entirely different stack. It's been a bit more of a stack du jour, based primarily on TypeScript, with accompaniment consisting of DynamoDB, Kinesis, and AWS Lambda, and the whole symphony managed by Apex and Terraform.

While the learning experience has been fascinating and valuable, I frankly miss working with Python. Ideally, I'd like to work on projects which are predominantly or at least largely written in it. Not a whole lot of serious software is single-language these days, but this preference is still important to me.

If you're looking for my résumé, you can find it here.

You're probably a small company, or a fairly independent team in a large one. You use something resembling a sane methodology for producing quality software, and it's shown itself to work well in this instance (or you're open to change). You don't like pointless meetings and are happy to reconsider any that are thought of as such by team members.

You use Python pretty heavily, if not exclusively, and plan on continuing to do so in the foreseeable future. Its role in the organization isn't tied exclusively to data science/engineering, ops, and light scripting. You probably use it for something web related, be it good ol' page loading web apps or APIs powering external clients.

If I'm lucky, you're heavily invested into open source in some manner. Maybe your main product is open, or you share some ancillary tools with the world. Dare I dream about your developers being allowed (or even encouraged) to contribute back to the software they use for their work?

You support your staff in attending conferences, and perhaps even sponsor some as a way to give back to the community. Ditto for relevant meetups and other local events.

You believe in work-life balance, or however you refer to the idea that happy, well rested employees live better lives and do better work.

You're not an adtech company and your products and services aren't primarily harmful to anyone.

You have an office in Los Angeles or no office at all.

If the above sections have you feeling like it might be a match, you can email me at nik+hireme@nkantar.com. Do us both a favor and mention this post in the email, so I know you're not entirely random. ;)

Note to recruiters: I'm not opposed to working with independent recruiters, but I tend to be very selective. If you choose to get in touch, please make sure what you send me makes sense based on the above. If you respect my time, I will respect yours, and quite likely remember you in the future for doing so.