Quick thoughts on the iPhone 6/6+ and Apple Watch.

This morning Apple held an event to show off some new shinies. The company also streamed it on its website (but only via Safari) and Apple TV. Well, it attempted to stream it, but the numerous technical difficulties are well documented elsewhere.

Due to said issues I've been unable to actually watch the keynote, so I'll only share my thoughts on the iPhones 6 and 6+ and the Apple Watch, informed by a variety of blogs which live-blogged and summarized the event. 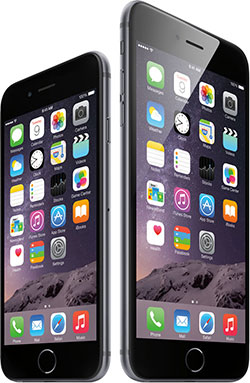 See, I still consider my phone a communication device first, and an entertainment device second. For this reason it's important to me that it comfortably fits into pockets and that I can easily use it with one hand. When I upgraded from the 4S to the 5S, the pocket situation worsened, but only slightly, while one-handed use became a little more challenging. The 6 seems bigger enough to pose far more serious challenges on both counts, and I suspect the 6+ will easily fit my definition of "phablet" and thus be out of the running by default.

I find this more than mildly annoying. I never cared for the huge phone fad, and was on the fence about the 5's introduction of the 4" screen to the iPhone world. I still sometimes prefer the old 3.5" screen in terms of size — it was just so easy to use one-handed!

The most common argument I hear in favor of larger screens is the improved media experience. The thing is, I don't really watch a whole lot of videos on my phone. Actually, I don't watch almost any, and when I do, they're nearly always just tech talks where the 4" screen serves just fine (as would the old 3.5", actually).

This trend of ever larger phones is partly exascerbated by the ever growing interest in smart watches, because once you have a capable device on your wrist, there's less of an incentive to have a "small" (read: reasonably sized) phone. While I'm all up for cool new gadgets, needing them isn't all that high on my list.

The wearable (as Apple insisted on calling it) introduced today is a smartwatch. A very sleek and competent one, at that. Styling is sure to be divisive (isn't everything Apple designs?), but it seems quite feature-laden and extensible, which is great.

What it isn't, though, is independent. The Apple Watch requires an iPhone (5 or later) and is thus extremely locked in. It's not a capable device on its own, disappointingly. Yes, I was hoping it would be, and no, not because I plan on buying something other than an iPhone any time soon. I guess I just wanted more of a revolution.

The Apple Watch pushes an existing paradigm way further than the competition. But it doesn't redefine a paradigm the way the iPod, iPhone, and iPad did. It doesn't create an entirely new class of devices, even if it offers so much some will undoubtedly feel it effectively does.

To be clear, I don't feel that Apple needs to create a new thing to survive, or anything like that — I suppose I just want it to do so. I want to be wowed with something I couldn't imagine. I want to be shown a new world, the way the original iPhone reveal nearly left me speechless.

There's a broader question here and it could be interpreted as something along the lines of "is Apple doomed without Steve Jobs" or at least "is Apple falling into mediocrity without Steve Jobs". However, I don't think either is the case, but I do think Apple has become a different company in the last few years.

I've found it interesting that the company has recently actually followed the market, rather than always striving to bend it to its whims. The bigger iPhones (mostly the 6/6+, though also the 5/5C/5S) and the smartwatch seem like reactions to the demand for such products, as opposed to the usual forced supply. While I have no doubt that both will sell extremely well, it's important to note that previous product introductions brought about larger paradigm shifts. "Here's the bigger iPhone you asked for" versus "here's the lighter iPad you didn't even know you wanted".

I don't think this change in mentality is necessarily a bad thing. After all, paradigm shifts are tricky, and sometimes other companies do get it right first. There's nothing wrong with following, especially when done well and while springing past the competition.

And well Apple has done.

For a humorous rundown of today's keynote see this liveblog (read from the bottom).

Older:
How Not to Recruit a Developer
Newer:
Free Isn't Free